“Life is never unfair” are the words of Elisha. He was born in a village in Mangalore, lost his father at an early age, and, with that, lost all of the hopes and dreams he had. It was difficult for his mother to take care of Elisha and his two brother, so she sent Elisha and Samuel to New Home. Elisha came to new home at age 10, and now he studies in 10th Standard ICSE Syllabus. In New Home he has found his lost hope, and his dreams of a bright future are clear again. He is fond of cars and books and also has a sharp memory. He wants to grow as a person who can make a difference in the society.

“I see my life taking a good turn,” says Bhavana. Her painful story includes losing her parents to disease and her brother in an accident. Bhavana was left alone with her younger sister. Their uncle brought them to Bangalore, but to Bhavana’s amazement, she had to separate from her sister and stay back at an aunt’s house as a maid. Life was terrible for her there. Once the CWC found out about Bhavana, they rescued her and admitted her at New Home. Now she is loved and tkane care of by the New Home family. She is getting education and facilities which she rightfully requires. She is happy to live with her sister and many other friends in New Home. While picking up the language was difficult initially, she has improved with the help of volunteers and is now pursuing her 10th Standard.

There are no upcoming events at this time. 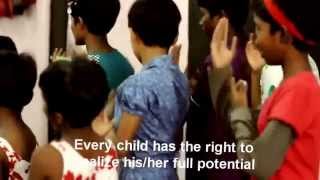 Immediate need for constructing a home for 48 children under our care!!!

Reaching Hand, as of now, accommodates the kids of New Home in a rented premise. It currently consists of 46 children (23 girls + 23 boys) placed in two buildings. Our dream is to build a Dream Home and Dream School for our children along with a kitchen, canteen and a huge ground that can eventually accommodate 500 children.

Reaching Hand is a registered Charitable Trust started in 1996 to work with vulnerable children, marginalized women & deprived families empowering them to lead a life of hope, self-worth and dignity. It envisions a promising future for all by acting as a catalyst for social change. Empowerment of children, women & families from weaker sections of society through quality education, health care and skill development is the key focus of Reaching Hand